33-Year-Old Millionaire Buried With $2Million Worth Of Jewelries, His Favourite Timberland And His Bentley (photo) 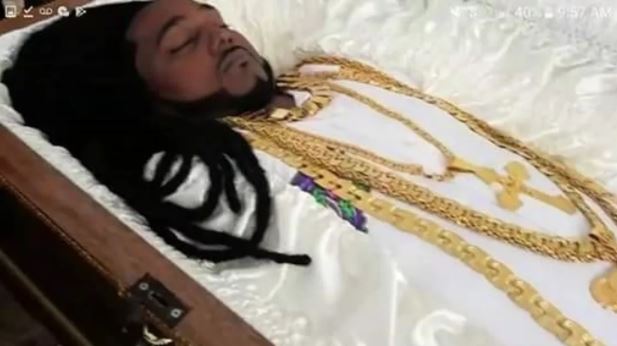 A 33-year-old millionaire, identified as Sheron Sukhdeo, was shot multiple times in a drive by attack outside the home of his mother in-law at Caroni Savannah Road, Charlieville shortly before 9p.m in Trinidad and Tobago. 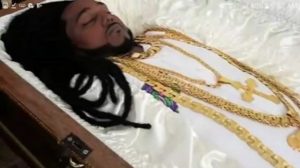 Asiribase understands that around 9pm, Sukhdeo came from a family outing at a water park when he went to drop off his mother-in-law at her Caroni Savannah Road home. While outside, a gunman approached and shot him four times.

He was taken to the Chaguanas Health Facility where he was pronounced dead. This occurred one week after his wife, Rachel, took to her Instagram to say that he “spoiled her smile”. She uploaded a video with dentures (a removable frame holding one or more artificial teeth) at the front of her mouth to show the abuse she gets from him.

The two have been in and out of media reports over claims of domestic abuse. Sources say Rachel was interviewed by police, however, no one has been detained in connection with the crime. 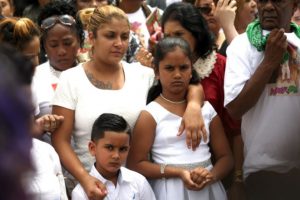 Rachael Sukhdeo, wife of slain Chaguanas businesman , Sheron Sukhdeo who was gunned down while visiting his inlaws at Charlieville. his son Sheron Scott Sukhdeo and daughter Sherona at their fathers funeral which took place at his Xavier street Chaguanas home.

He had gained an Instagram following of close to 45,000 people by the time he had died. His family life was on display and we could see that he has a son, a daughter and of course his wife named Rachel Sukhdeo.

Despite all the abuse saga, they always seemed to get back together and carry on like normal. She was hospitalised shortly after his death and it was alleged that she tried to take her own life although there is no proof of this.

The young Estate agent and car dealer was however buried on Friday, in a $50,000 casket alongside accessories he might be needing in the afterlife.

The father of two died while being treated at a hospital and according to local media, he left behind an empire worth tens of millions of dollars to his wi 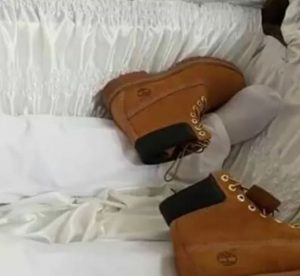 He was dressed in white along with his famous gold jewellery adorning his fingers, hands and neck, he was laid in a $50,000 casket which had words like ‘Sheron’s Auto’ and ‘World Boss’ inscribed in it.

Sukhdeo’s body arrived at the house in a white hearse just before 10 am, where several of his luxurious cars were seen parked.

At the funeral service of the millionaire in his palatial home in Orchard Gardens, Chaguanas, hundreds turned out to mourn the business man whose funeral reflected the life he lived – luxurious vehicles, excessive gold jewellery, friends and family, loud music and a car show.

His body was taken into the house briefly and then brought back outside, where his wife Rachael Sukhdeo participated in his final Hindu rites.

Just before his body was reduced to ashes (cremation), Sukhdeo was showered with Moët champagne at the Waterloo Cremation site in Carapichaima 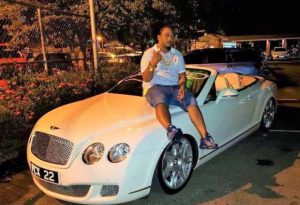 Before his death, the businessman was charged twice for assault in February 2016 and later in May 2017, but the charges were dropped after his wife refused to testify

Sheron Sukhdeo was known for being quite the flashy man and he lived a lifestyle that was similar to a rap video. He had Lamborghinis, Bentleys and even allegedly owned a private plane.

The lifestyle that Sheron Sukhdeo lived was clearly not from a “regular job”. He owned a number of businesses, which includes but is not limited to car dealerships and real estate. There are also strong allegations that he was involved in not so legal activities.

Social media in Trinidad has been buzzing with people who are either glad to see him gone or mourning his loss. Those who are not fond of him allege that he was a “don” who used violence and bribes as a way to get his way. Even the police in Trinidad claim he was “marked for death” and had lots of enemies.

Whatever the truth is, one thing is for sure and that he lived a life of extravagance, even in death. His funeral had him buried in all his jewellery. His family knows him best and knows how he would want to be buried after all.

May his soul rest in peace.