1986 World Cup was held in Mexico after which country pulled out as host? –KOSERENAIJA 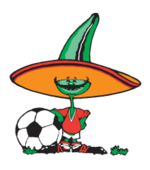 Colombia was originally chosen as hosts by FIFA in June 1974. However, the Colombian authorities eventually declared on 5 November 1982 that they could not afford to host the World Cup under the terms that FIFA demanded because of economic concerns.

Mexico was selected on 20 May 1983 as the replacement hosts, beating the bids of Canada and the United States (who eventually hosted the 1994 World Cup ), and thereby became the first nation to host two World Cups. This second World Cup in Mexico came 16 years after the first one in 1970 . A severe earthquake in September 1985, eight months before the tournament, cast doubt over Mexico’s ability to organize the event, but the stadia were not affected and it was decided to go ahead with the preparations.

As 1986 had been declared the International Year of Peace by the United Nations, the advertising boards of all the stadia displayed the FIFA and United Nations logos along with the legend “Football for Peace – Peace Year”.

For the design of the logo an unofficial motto was adopted: “El Mundo Unido por Un Balón” (“The World United by a Ball”)

The official mascot of the 1986 World Cup was Pique , a jalapeño pepper, characteristic of

Mexican cuisine , with a moustache, a Colimote

sombrero , and Mexican football team colours. Its name comes from picante , Spanish for spicy, and was also a pun on the “PK” abbreviation of the soccer term penalty kick .

The following 24 teams qualified for the final tournament.

Eleven cities hosted the tournament. The Azteca Stadium in Mexico City, the largest stadium used for the tournament, hosted 9 matches (including the final), more than any other stadium used. Mexico City hosted 13 total matches; the Olimpico Universitario Stadium hosted 4 matches (if the Mexico City suburban town Nezahualcoyotl’s matches are included, this brings the total up to 16 matches). The Jalisco Stadium in Guadalajara hosted 7 matches, and the Cuauhtémoc Stadium in Puebla hosted 5 matches.

The hot and rainy summer weather in Mexico varied from desert locations like Monterrey to tropical locations such as Guadalajara; but perhaps the greatest hardship the players had to contend with was the high altitude of the Mexican locations. With the exception of Monterrey (still 2,000 feet above sea level), all of the stadia were located in cities that varied anywhere from Guadalajara being 5,138 feet (1,566 meters) above sea level to Toluca being 8,730 feet (2,661 m) above sea level- making conditions very difficult for the players running around in these stadia. Mexico City, the location of the final match and the location where the most matches were played was 7,380 feet (2,250 m) above sea level.

It was won by Argentina (their second title, after winning in 1978 ). Argentina was captained by the 25-year old Diego Maradona, who played a large part in his team’s success. Maradona scored the ” Hand of God ” goal, as well as another voted “Goal of the Century”, in the same quarter-final against England. These were two of the five goals that Maradona scored during the tournament, and he also created another five for his teammates. Argentina beat West Germany 3–2 in the final at Mexico City ‘s Estadio Azteca . Total attendance was 2,394,031, an average per match of 46,039.

Canada , Denmark and Iraq made their first appearances at the final stage.

The 1986 World Cup saw the appearance of an audience phenomenon dubbed the Mexican wave , which was popularised worldwide after featuring during the tournament.

The format of the competition changed from

1982 , with the second round being played on a knock-out basis rather than groups. The 24 teams qualified were divided into six groups of four (A to F). The top two teams and the four best third-place finishers from the six groups advanced to the knockout round of 16 teams.