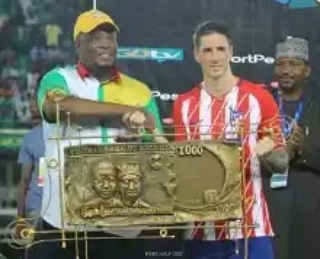 Kelechi Nwakali who is a bronze medal winner Rio 2016 Olympic, put the Nigerian team in front with a superb strike from outside the box that beat goalkeeper, Jan Oblak.

However, Atletico drew level soon after when Emem Eduok was dispossessed in his own half of the pitch.

Man of the match, Correa.                Substitute Destiny Ashadi should have restored the Eagles lead just before the interval, but he shot way off target from right inside the box after he was set up by the bright and lively Samad Kadiri.

Substitute, Fernando Torres put Atletico ahead for the first time on 64 minutes after they had missed a sitter earlier in the second half.

Usman Mohammed will then draw the Nigerians level in the 79th minute with a great solo goal when he dribbled his way inside the box.

However, when both teams were getting set for a penalty shootout to decide the winners of the GOtv Max Cup, Borja Garcies fired past goalkeeper Femi Thomas from inside the box for the winner five minutes from time.

Meanwhile, former Liverpool star, Fernando Torres was later presented with a special gift – a Gold sculptured N1000 note – to celebrate his final game for Atletico after the match.