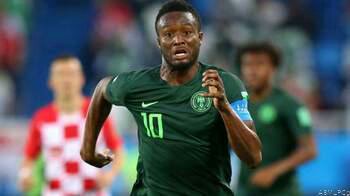 Mikel was hurt in the 2-0 victory at Volgograd Arena and played the latter part of the make or drop clash in pains.

“Unfortunately there is one injury. We have the captain who has a fracture of the metacarpal, but I think he can play with a cast,” said Rohr. “So, the medical team is working on him.

“We are now preparing for our next game against Argentina. We’re focused on this game and we’ll do all to prepare this team in the best way possible,”

The three-time African kings landed in St. Petersburg on Sunday evening, and they will train on Monday at the Saint Petersburg Stadium.

Nigeria is on the periphery of elimination after two games and must avoid defeat against La Albiceleste to progress to the round of 16.