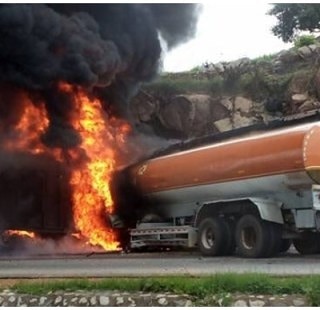 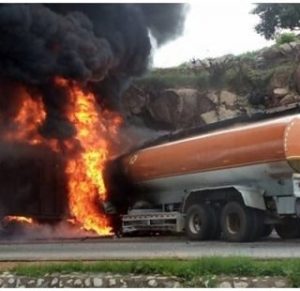 Barely 24 hours after a fuel tanker claimed nine lives in Lagos-Ibadan expressway , another fuel tanker along Minna-Suleja road on Friday collided with a truck and went aflame.

It was gathered that Firefighters responded quickly on the scene to put off the fire.

At least five persons have been confirmed injured in the early morning head – on collision between a  tanker and a trailer on Friday .

The tanker was laden with Kerosene , a highly flammable hydrocarbon liquid .

The spokesperson for the Federal Road Safety Corps , Mr Bisi Kazeem , who confirmed the incident to our correspondent on Friday , said the victims have been taken to the hospital.

The spokesman said the accident happened at 08:57hrs local time , and that the Corps was notified within two minutes , while first responders arrived the scene in 14 minutes at 09:13 hrs .

He noted that the trailer had no visible number plate , while the fuel tanker was loaded with Kerosene — a highly flammable material .

“The cause of the crash was speed violation , leading to loss of control ,” Kazeem added .

He said that the nature of the crash was serious , being multiple accidents .

“ Victims have been taken to the General Hospital Suleja , as they were attended to by FRSC officials and other security agents such as men of the Nigerian Police Force and Fire Service officials from Suleja .

“The vehicles caught fire after a head -on collision,”

KosereNaija recalls that no fewer than nine persons lost their lives on Thursday after a tanker exploded on Otedola Bridge in Lagos.

The Federal Road Safety Corps, FRSC, in a statement on its official Twitter handle also confirmed that 54 vehicles were burnt to ashes in the incident. 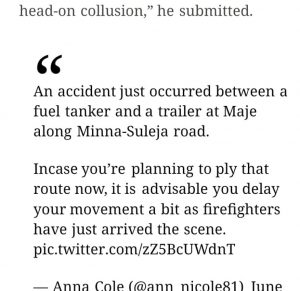 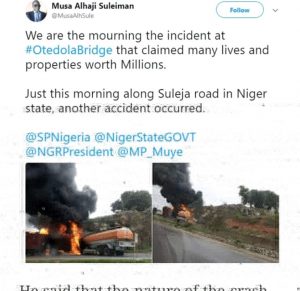 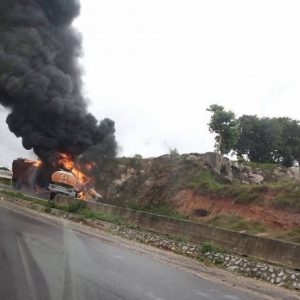