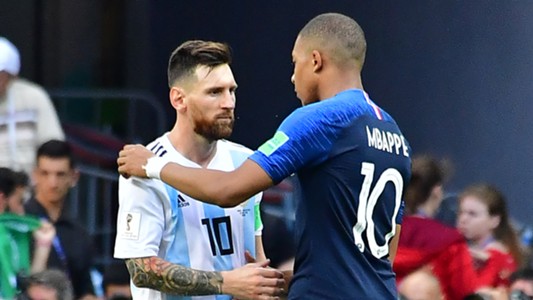 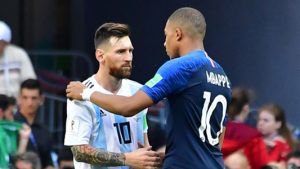 Wow. The World Cup that has had pretty much everything might just have delivered its defining moment.

And in the middle of it all, one superstar.

Not Lionel Messi either. The five-time Ballon d’Or winner was a passenger this time. His magic worked in getting Argentina to the finals in the first place but would not be repeated in Russia.

Instead, this was Kylian Mbappe’s breakout match.

At 19 years of age he delivered a truly stunning individual performance.

It was he who had Argentina rocking on their heels in the first half, his mesmeric direct running both with and without the ball leaving the opposition defence frightened to get near him. And when France needed a matchwinner after going behind briefly in the second period, his two goals ensured they go into the quarter-finals as the team to beat.

Mbappe’s electric pace set up the first goal, with a superb 60-yard dash being halted only when the Paris Saint-Germain star was hauled down by Marcos Rojo in the box. Antoine Griezmann stepped up to slot home from the spot. 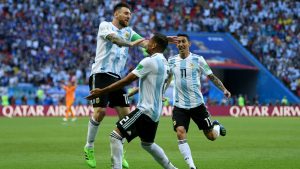 France had plenty of opportunities to grab a second, with Mbappe again scaring the daylights out of Argentina to win a deep free-kick, then Griezmann failing to find a team-mate as he squared from the bye-line.

But from there the French somehow took their foot off the throat and Argentina grew in confidence. While Messi was having little say on the ball, with only 18 completed passes in the first 45 minutes, there came a moment of inspiration from Angel di Maria.

From Banega’s cut back, Di Maria was left in space around 25 yards from goal and proceeded to unleash a stunning strike which was curling away from Hugo Lloris into the far corner from the second it left his foot. It was perhaps the best goal of the tournament to that point but better was still to come. 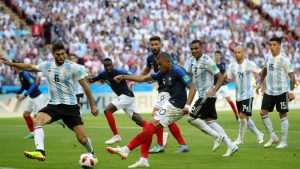 Argentina started the second half quickly and a Messi shot from a half-cleared corner was flicked home instinctively by full-back Gabriel Mercado. Just nine minutes later though and France had levelled with a truly phenomenal drive by Benjamin Pavard after Lucas Hernandez’s cross had been allowed to run to the far post. Even Di Maria’s wonder-strike couldn’t match the right-back’s for perfection of technique.

With the game seemingly back on a knife-edge, Mbappe decided to take the game by the scruff of the neck once more. After Blaise Matuidi had been unable to get a convincing touch on a low Hernandez cross, Mbappe pushed the ball into space behind the Argentine defensive line and then drilled a low left-foot strike under keeper Franco Armani.

He would score again to put the tie beyond doubt. A wonderful team move originating from Lloris in goal reached Paul Pogba, whose delicious pass for Olivier Giroud was turned superbly into the path of Mbappe. There was simply no doubt as to whether he was going to score, as he drove the ball across Armani to kill the game off.

With that Mbappe had become the first teenager to score a brace at a World Cup since 1958. Somebody by the name of Pele was the last to achieve the feat, and on this kind of display there is every right to believe he could one day be considered among such exalted company as one of the greats of the game.

Sergio Aguero’s injury-time header ensured that this absolute classic remained unsettled until the final whistle, but it would have been unjust for Mbappe not to end on the winning side.

Because here today Kylian Mbappe showed just what he could do in the game of football. Intelligence, pace, touch, power, finishing… there is little he doesn’t have in his armoury.

France were the better team by far and Argentina had little to offer for too much of the proceedings, but it took a truly special talent to make the difference.

The game that had everything was won by the player that has everything.